The Commonwealth Governor’s School program serves students in grades 9 – 12 from Caroline, King George, Spotsylvania, and Stafford County. CGS students apply to be in the program through their school district. Beginning in January of each year student applications are accepted by the participating school districts and a rigorous identification process ensues. CGS students are selected for the program based on achievement test scores, teacher recommendations, a timed writing assessment, service activities, a portfolio, and an interview. Students in the CGS program are considered to be academically gifted and highly motivated. 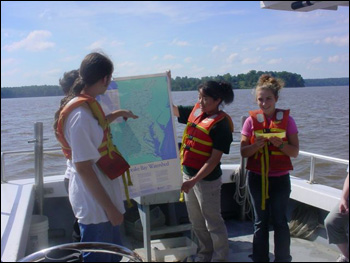 CGS students are truly amazing adolescents. Instead of taking the path of least resistance, CGS students have decided to challenge themselves by being part of a very rigorous academic program. In addition, the average CGS student is highly involved in after school activities including SCA, band, VHSL sports, and numerous school organizations. The majority of CGS students are involved in at least one community service project during the year.

Students who successfully complete the requirements of CGS receive an Advanced High School Diploma. In addition, the diploma includes an official Governor’s School seal issued by the Virginia Department of Education. Beginning with the Class of 2010, all CGS students are required to sign the Early College Scholars agreement as ninth graders. Students who fulfill the requirements of the agreement receive the Early College Scholars seal on their diploma along with the Governor’s School seal.

The student’s home-based high school scale is used for computing grade point average and class rank. The Class of 2021 had 139 graduates, 7 were Valedictorians and 7 were Salutatorians. 100% of these graduates are currently enrolled in high education for 2021 – 2022. Scholarships awarded totaled more than $3.2 million.